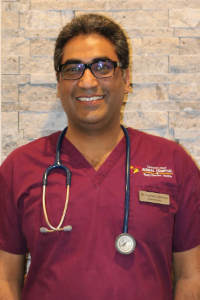 From his earliest memory, Dr. Sharma’s family always had pets that were loved as members of the family and he aspired to be a veterinarian from a very young age. During his 3rd year of university he rescued a puppy named ‘Suko’, whom he considered his first ever ‘own’ pet and would always miss her. His lifelong dream came true when he graduated as a veterinarian in 2003. Further, he completed his Master of Veterinary Science degree specializing in Animal Reproduction, Gynaecology and Obstetrics. He was awarded a university scholarship for achieving the highest grades in that department. Thereafter, he worked as a mixed animal practitioner for the next four years and conferred best field veterinarian award by I.S.S.A.R in 2008.

Dr. Sharma returned back to school in 2010 to pursue a doctoral degree at University of Alberta, Edmonton. He passed his Clinical Proficiency Examination at Cummings School of Veterinary Medicine, Tufts University, Massachusetts, and completed American Veterinary Medical Association’s ECFVG Certification program. Subsequently, he was awarded his Certificate of Qualification by the Canadian Veterinary Medical Association. He attended special hands-on training sessions on Small Animal Emergency and Veterinary Dentistry at University of Calgary and University of Illinois, respectively. Before moving to Calgary to work as an associate veterinarian in a busy practice in 2014, he also worked at a small animal practice in Edmonton for a period of almost 2 years.

Dr. Sharma also continued his research efforts and has numerous scientific publications to his credit including papers in world renowned Journals from Elsevier and Wiley. He reviewed scientific papers for more than 30 Veterinary and Animal Sciences journals and is also on the editorial board of the several international journals of repute. He is an active member of AAFP (American Association of Feline Practitioners), Edmonton Association of Small Animal Veterinarians (EASAV), AbVMA (Alberta Veterinary Medical Association) and CVMA (Canadian Veterinary Medical Association). His special areas of interest include small animal dentistry, reproduction, endocrinology, and dermatology. When he’s not caring for your furry friends, he enjoys traveling, watching sports, and spending time with his family and of course with his dog ‘Toopy’ and cat ‘Binoo’.

Dr. Sharma’s philosophy is to provide high-quality health care using state-of-the-art technology and the latest in veterinary techniques in a friendly and supportive setting. He is very excited to open his practice where he can use his clinical skills gained in veterinary field over a period of 12 years. Passionate about treating pets like members of the family, he is confident to provide the kind of care you want for your pet.

Dr. Gosal was born into a farming family in Punjab, India. He grew up taking care of his cows, buffalo, dogs, and fish. His desire to become a veterinarian took a leap forward when he realized there was no certified veterinarian in his neighbourhood to properly treat his sick and dying dog.

He graduated with Doctrate in Veterinary Medicine in 2003. To pursue his studies further, he completed a Master’s in Veterinary Pharmacology and Toxicology in 2005. He also represented his university on several occasions in Greco Roman-style wrestling. Before moving to Edmonton in the winter of 2008, he worked as a mixed animal veterinarian for 3 years. Very quickly, he finished the rigorous certification process to obtain the license to practice veterinary medicine in Canada and USA. He has been working as small animal veterinarian for almost 6 years in Edmonton and the surrounding area, taking care of people and their pets.

Read More About Dr. Gosal
He has authored and co- authored numerous research articles published in international peer reviewed journals, as well as refereeing submitted articles. He can also be heard on 630 CHED radio on Sunday at 7:00 AM hosting the show Pet Talks, and he routinely writes articles for the Ask a Vet column in Country Asides weekly magazine. When time permits, he devotes his time to his local and provincial associations. Currently he is serving as President of the Edmonton Association of Small Animal Veterinarians, as well as serving on the Alberta Veterinary Medical Association’s small animal advisory committee.

For his great enthusiasm and dedication to veterinary medicine in Past five years he was awarded “Young Veterinarian of the Year” in 2011 by the Alberta Veterinary Medical Association. For his academic achievements and meaningful contribution to the veterinary field he has also been awarded Fellow status by the American Academy of Veterinary Pharmacology and Therapeutics, one of only six Fellows in Canada.

Dr. Gosal has called Edmonton his second home ever since moving to Canada and lives with his wife (who is a teacher) and 3 year old son. He is still trying to learn winter sports whenever he can. He has two dogs, 7 year old Jonny (labrador) and a 6 year old American Eskimo (Marshal).

When he is at work he enjoys the communication aspect of the job, while really getting to know people and their furry family members, and always tries to make it a fun and positive experience for everyone. 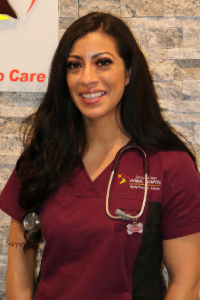 Dr. Krissia Menjivar earned her Bachelor of Science through the University of Alberta. Following this degree, she graduated from the Western College of Veterinary Medicine in 2013. Since then, she returned home to Edmonton and has practiced at various clinics and at the Edmonton Humane Society. Dr. Menjivar joined us as a full time veterinarian in January 2018. When it comes to veterinary medicine, Dr. Menjivar is particularly interested in dentistry, endocrinology, soft tissue surgery and orthopedics (an interest that she plans to further herself in). Outside of work, she enjoys playing soccer, snowboarding, hiking, running, and bodybuilding. Her home is shared with her 2 cats, Tiki and Mini Egg.
0 Links

Read More About Dr. Zandi
Dr. Zandi was born and raised in Shiraz, Iran. He decided to become a veterinarian because of his love for Animals and his passion for science. He graduated with his DVM degree from Azad Veterinary College in 2005 and started working for Iran Veterinary Organization as a full time veterinarian. He worked there in different fields like public health, large and small animals, and poultry for more than 8 years until he decided to move to Canada with his family.

Dr. Zandi is proud that he has been a member of Edmonton West Animal Hospital since 2018. His areas of interest are soft tissue surgeries, dentistry and internal medicine.

When not in the clinic, he enjoys his time with his family, playing and watching soccer, traveling and reading. 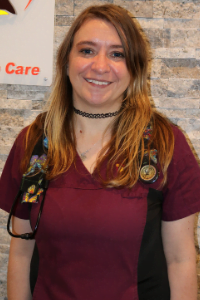 Read More About Dr. Bouclin
For as long as she can remember, animals have always been an important part of Dr. Bouclin’s family. As a child, she had a natural ability to care for a variety of pets from dogs, cats, and rabbits. It was not uncommon for her to bring home a stray puppy and she had a knack for encouraging other family members to adopt these stray pets. Everyone who met her assumed she would grow up to be a veterinarian and Dr. Bouclin continued down this path by completing her Bachelors of Education and Animal Sciences degree at the University of Alberta.

From there, she was able to combine her love of travel while obtaining her veterinary education. Dr. Bouclin graduated from the veterinary program at St. Georges University in the Caribbean and spent her clinical year at the University of Wisconsin-Madison, USA. This international education allowed her to appreciate all kinds of human-pet bonds and levels of medical care.

Even though Dr. Bouclin loved the Caribbean sun, home is home, and she returned to Canada to work. She spent a few years practicing at the Edmonton Humane Society, followed by a year in emergency medicine at an emergency clinic in Edmonton. She then worked in private practice for 5 years after that before joining us at Edmonton West Animal hospital!

Read More About Dr. Uppal
Dr. Uppal joined the Veterinary School in the year 2005 to pursue his childhood dream of becoming a veterinarian and graduated in the year 2010. He worked in mixed animal practice before joining a small animal clinic in the Calgary area in 2018. When opportunity arose at Edmonton West Animal hospital he grabbed it by both hands to practice progressive small animal medicine. He likes all the aspects of veterinary medicine but his interest lies in surgery, pediatric medicine and regular day-to-day medicine cases. He has been a pet parent throughout his life and is compassionate about his profession. His hobbies include reading and horse riding.
0 Links 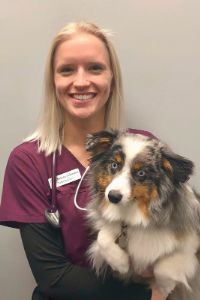 Read More About Dr. Schuster
Dr. Chelsea Schuster completed her Bachelor of Health Sciences in Biomedical Sciences at the University of Calgary and subsequently completed her veterinary training at the University of Calgary Faculty of Veterinary Medicine. She moved to Edmonton after her schooling and practiced in the Edmonton area prior to accepting a position at Edmonton West Animal Hospital. Dr. Schuster’s professional interests include pain management, dentistry, and surgery. Outside of work, she spends most of her time with her boyfriend and their miniature Australian Shepherd enjoying the many parks and natural areas of Edmonton.
0 Links

Please find us at our new address:

You can now text us with your questions!